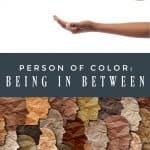 Like many of you, I have spent much of 2020 grappling with Big Questions. What does it mean to be a person of color? Who and what is most important to me? How do I acknowledge my strengths – and my privilege? And how do I use it to help make the world a better place? I am doing this from a place of in-between. I am American, and not. I am White, and not. I belong, and I don’t.

And I appreciate how this type of duality was framed in a recent conversation between researcher and author Brene Brown and former President Barack Obama on the Dare to Lead podcast: this type of paradox can be transformative.

In terms of age, Barack Obama is my contemporary. Which means neither one of us – like so many others of mixed heritage and cultural identity – had few role models; there were simply fewer people who had walked this path before us. Fewer examples in public life – or in our schools.

This straddling of worlds is also highlighted in Brit Bennett’s compelling historical novel, The Vanishing Half. The author’s riveting story explores the “what if” that exists for so many of us with multi-cultural identities.

Indian culture – even outside the borders of India – can be insular. Steeped in generations-old traditions, it can be hard to navigate the social order, to connect across the invisible – yet tenacious – lines of Caste that Isabel Wilkerson outlines so clearly in her book.

In my day-to-day life, I have encountered relatively few people in my generation who are half White, half of Indian descent.  I have two sisters with parallel genetics, and three first cousins, all male, who have similar parentage. But as a child, the bulk of your waking hours are spent in school.

Growing up in what is now the backyard of Google, Facebook, and half the tech industry, it seems difficult to believe that I was typically the only person of Indian descent in my entire grade – sometimes my sister and I the only ones in the entire school. In junior high, there was a brief moment when a girl with similar heritage was in my class, but she soon moved away. It wasn’t until college that I had a sustained friendship with someone with a similar ethnic background, and to whom I was not related.

Ola Caracola reflects on race in this well-written piece on Medium. At one point, she reflects on the admittedly mundane issue of the color of bandaids. For me as a young dancer, it was the color of ballet tights that didn’t quite fit. The accepted – often prescribed – color of tights was a pink, that not unlike the bandaids, while it wasn’t really the exact color of any human, it also clearly wasn’t the color of me.

Being “In Between” in School

Having spent my life in public schools, we talk a lot about kids learning from “someone who looks like them.”  And the data supports that not just Black students, but ALL students learn better from Black teachers. But what does this mean for kids of mixed heritage? How do kids who are in between see themselves in educators who may or not reflect this duality?

In the generation of my children there are many more, of course, but it means that few of THOSE children will have the opportunity to encounter, much less than learn from, an educator with a parallel shared experience. So in the absence of the sameness, you gravitate toward the shared different-ness. My closest friends come in all shapes and sizes, some share my European-American heritage, others, my Indian heritage, others, neither.

Now a person with Indian heritage will be in a position of national leadership (the “pressure” of which was not lost on the unbelievably spot-on meme-makers of 2020, like this one from Anand Giridharadas: “I told you you should have studied vice presidenting in college, but you only wanted to do engineering” – Indian-American parents right now.).

Kamala Harris claims her Blackness, as well she should, a proud graduate of Howard University. But as her memoir attests, she was raised so influentially by her mother, a sari-clad Indian doctor. And those of us who share being the legacy of interracial, intercultural unions appreciate her duality in the way it helps to further illuminate a pathway forward for our dual selves.

At many times in my life, I have felt like a chameleon.  Sometimes, I have the privilege of being a fly on the wall, blending in seamlessly.  At other times, I stick out like a sore thumb, painfully obvious in my other-ness.

Growing up, I didn’t feel Indian and I didn’t look White. It was a conundrum that I grappled with through most of my school career.

Being Both, Being Neither

My multicultural name trips up your tongue, my ambiguous complexion furrows your eyebrow, but birth certificate asserts my belonging in this so-called melting pot.

I have experienced relative lack of economic privilege, growing up with a chronically under-employed father, my mother taking a job she didn’t really want to provide for our family.  I have experienced this lack of economic privilege while knowing that there was a wide, deep safety net, in the form of my White grandparents and their assets, which would mean that if our family “fell,” it wouldn’t be far.

I am searched and scrutinized going through airport security, yet I breeze through immigration with my unaccented English and navy passport, accompanied by my red-headed husband.

I have traveled widely, and I am always assumed to be a local:  in Asia, in Europe, in Polynesia.  I am privileged that I do not choose my travel itineraries based on how I might be received at my destination, I am not limited by others’ preconceived notions of me.  In the US,  I am often assumed to be Latinx, but I am a Spanish-learner (who can also get by in French, on a good day!).

In college, in Houston, I was embraced by my fellow students with families from the Indian subcontinent, but I started from scratch – with little prior knowledge of Indian languages, culture, history or even food.

I started teaching in a school that had maybe twenty-five White students in a student body of 2,400; I was an educated brown-skinned person at the front of my classroom.  That district was remarkably under-resourced, a reality that I had been shielded from in my suburban upbringing; I was an educator from a privileged background who had trouble processing the extreme inequities between my own childhood classrooms and the ones in which I was teaching.