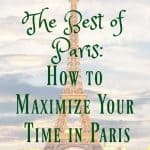 Maximize Your Time In Paris #1:  Stay in a central location

For us, this meant a hotel just off the Rue de Rivoli.  The room was small – but we were barely in it – and the bathroom was generous by most European standards (especially the high-mounted rainfall shower).  What mattered most to us was that les Jardins de Tuileries was basically our front yard for the week. So nearly every day started with being able to stand and look to our left and see the Louvre, and to our right and see the obelisk of the Place de la Concorde framed by the distant Arc de Triomphe, with the Eiffel Tower peeking up above the trees.  Without going anywhere, we were everywhere, and we rarely more than 15-20 minutes from anything we wanted to see.

Maximize Your Time In Paris #2:  Walk when there is a lot to see on the way

We did this several times, like, for example, walking from les Catacombes in the southern part of the city, through le Jardin du Luxembourg, and detouring to the Pantheon before crossing the Seine back to our hotel in the first.  We also walked from les Invalides (the military museum) to the Eiffel Tower, before catching a bateau mouche (river boat) on the Seine back to the first arrondissement.

Maximize Your Time In Paris #3:  Metro when there’s not – or Metro one way, and walk the other

For other destinations, like Montmartre, we chose the Metro and walked once we got there (including to the top of the Sacre Coeur).  Our visit to the Arc de Triomphe began with a metro ride from Musee d’Orsay to the Arc and ended with a stroll down les Champs-Elysées back to the first (with the obligatory Ladurée stop on the way).

Maximize Your Time In Paris #4:  Eat where you are

Find a café or bistro near – or on the way to or from – your day’s itinerary – fold your meals into your travels.  If you want to eat at Cafe de Flore or Le Relais de l’Entrecôte, then plan a visit to the St. Germain before or after your meal.  Or conversely, if you are visiting the Eiffel Tower, choose Cafe Aux Cerises, or another nearby spot. And, unlike most places in the US, the food offered in museums is often quite good – and we even had a very serviceable croissant from a gas station!  (Read more here.)

Maximize Your Time In Paris #5:  Use the Museum Pass…

We found the four-day pass to be worthwhile for our fast-paced, someone flexible style of travel.  It allowed us to pop into places for a short while, and also skip several lines. (Do note that some attractions and options, such as the Eiffel Tower, les Catacombes, and timed tickets are not included with the museum pass.) (Read more here).

Maximize Your Time In Paris #6:  …Except at the Louvre

Despite being a location that accepts the Museum Pass, we found ourselves unable to visit the Louvre using our pass, due to the museum being at capacity.  So either wait in the pass line first thing in the morning (which didn’t fit into our schedule) or get a timed ticket (enter through the Richelieu archway).

Maximize Your Time In Paris #7:  Buy as many timed tickets in advance as possible – but also leave room for flexibility

We bought timed tickets for the Eiffel Tower, the Catacombs, the Atelier Van Gogh art exhibit, and, eventually, for the Louvre.  We also reserved our Loire chateaux tour (with Paris City Vision), as well as purchased most of our train tickets in advance.  This was especially important for our TGV (Train à Grande Vitesse – the high-speed rail line in France) return from Tours, for example, as TGV run less frequently, but travel much more quickly, so you don’t want to risk not having a seat.  We did, however, leave pockets of flexible time, where we chose to do things like pop into the Rodin museum with our Museum Pass, linger at our neighborhood cafe, or wander through the carnival that was set up in our “front yard” at the Tuileries.

I hope these 7 tips to maximize your time in Paris help you plan your best trip ever!

Is the Paris Museum Pass Worth It: 4 Day Pass Review

The Best of Paris: 5 Places to Eat Out in Paris – Without Dressing Up