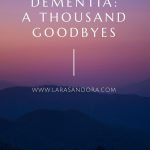 The loss of someone with late stage dementia – whether brought on by Alzheimer’s, Parkinson’s, Lewy Body disease, or following decades of a life well-lived – is not one goodbye, but thousands.  There is not one moment of loss, but dozens upon dozens – sometimes multiple losses in a moment.

Late stage dementia manifests itself in so many ways. The inability to recognize your daughter as who she is, but rather, who your mind deceives you that she is – your sister, your childhood friend, even your own mother.  That moment is a loss of so much – of her memory, but also her memories – the first sounds and first steps and birthday cakes and family camping trips – and everything in between – that make her who she is.

And while it is often true that she can reminisce at length about the house she grew up in (which, fortunately, my grandparents lived in well into my adulthood, so I can ask her relevant questions about it), these patches of memory do not carry the same significance, the same depth of understanding of a life lived across seven decades.

Patiently, we listen.  Trying to weave the fragments of thoughts that emerge from her mouth into our understanding of her life.  For that is how we make meaning.  And our memories are shifting as well.  Each week, each month, each year of steady cognitive decline creates for us more memories of her as she is – leaving less space for memories of who she was. Late stage dementia robs the patient of their memory and their loves ones of their memories.

The slow, nearly empty, woman who sits before us is replacing the mom who didn’t hesitate to play softball, jump in the pool or speak her mind.

A thousand goodbyes, just today.  For today alone we have lost a thousand shared memories – gone from her memory and fading from mine.

And tomorrow, another thousand goodbyes.  Too many to count, too many to speak aloud or attempt to record.

A life lived is only truly recorded in memories.  We pull out photos and videos, yearbooks and other memorabilia from another century.  Far-flung friends mail her back letters she sent to them decades ago, in lieu of their visits, prevented by health guidelines.  But none of these alone can tap the memories behind them.

So we listen.  Hoping that some of the words that tumble out of her mouth will string themselves into a story again – a coherent thought that contains the memories behind that black and white photo or crackly video clip that was migrated from film to first to VHS tapes, then to DVDs, and now to hard drive.

But mostly we say a thousand goodbyes.  And she does too, in the confused silence that locks her in more and more each day.

Person of Color: Being In Between

Refresh Your Mother’s Day: 6 Simple Ways to Rethink the Day