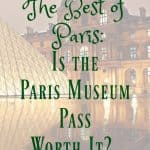 As you plan a trip to Paris, you may be asking, “Is the Paris Museum Pass worth it?” The four-day pass for one adult (62 Euro at the time of our visit), gained skip the line access for both my 13-year-old son and I as we toured Paris.

For reasons beyond our control, we were actually outside of Paris for one full day of our four days – if we could have rearranged our schedule a bit (or if the pass allowed you to choose the four days you wanted to use it), we could have used the pass even more fully.  Even still, the pass was definitely worthwhile. We would have spent 90 Euro in 3 days (or up to 150 Euro if we had four consecutive days), but the skip-the-line access was also helpful during our peak summer visit.

So, is the Paris Museum Pass worth it?

To help you decide if it will work for you, you can read how we spent our time.

Youth under 18 are granted free admission for most museums in France (though not other attractions like the Eiffel Tower), so prices listed are for one adult, in the summer of 2019.

The line wasn’t terrible, but we were still happy to skip it.  We visited on a Tuesday, which is less than ideal, as many other museums in the city are closed that day.  However, we still managed to enjoy plenty of impressionist masterpieces, as well as the grandeur of the museum itself.

Arc de Triomphe (12 Euro to climb, 0 Euro to gawk from the Champs Elysees)

There was a special military event the day we visited, but we still managed to gain quick access with the pass and the views were worth it. This was my first climb to the top, but my son said it was one of his favorite things we did.

We visited first thing in the morning, and the line, even with the pass, was long.  But, like most museums in Paris, it was the security check that took the time, not that the museum was at capacity.  While we, of course, enjoyed the large Monets, the collection on the lower floor was also very worthwhile.

A quick stop here to see the thinker – we would likely have skipped this altogether without a pass, but it is SO close to Invalides, I’m glad we had the pass and popped in.

Easy access to Napoleon’s Tomb, plus World War II museums.  We did need to get a free youth ticket to scan everywhere, but once we understood that part it was easy.

We visited on a day with the musical gardens, which cost extra to view.  It was nice, but not necessarily worth the extra cost (typically free access). The museum pass line for the chateau itself was long – and managed to get even longer while we waited in it.  The only way to avoid it would be a timed ticket. The museum pass is also valid at the Grand and Petite Trianon palaces, but note that they open at noon. Best bet is to be in line by 9 (not walk off the RER train at 9, like we did!)

From Versailles, we took the RER back to the southern portion of the city, and worked our way north through the Jardin de Luxembourg, en route to the Pantheon.  Stunning from the outside, and interesting on the inside, we missed the time window to climb to the top, but that is an option from April to October (3 Euro additional).

“Day 4″: (if we could have used the days not in sequence)

Stunningly gorgeous – a can’t-miss stop, even for my utterly secular teenaged son.  The stained glass literally takes your breath away. (And skip the line access would have been nice here!)

Right next door to the Sainte Chapelle and a different world – mostly highlighting its use as a revolutionary-era prison.  No line at the time we went, but you can skip the line with a pass.

Closed Mondays – but we would have gone in if we were able.  Highly recommended, especially for tweens and teens.

Centre Pompidou (14 Euro, or 5 Euro for the panoramic view)

We went for the air conditioning – and the shop – but would have checked out more with the pass.

After two tries to wait in the Museum Pass line (there are days the museum is so full that it is closed unless you have a timed ticket), our third trip was the charm.  But because our pass was expired, we went with the timed ticket option (and even that was sold out on the Louvre website, so we snagged one from the same tour company we had used for a chateaux tour.)

So is the Paris Museum pass worth it?  It was for us, with the caveat to get to Versailles early, and either get in line VERY early at the Louvre or spring for timed tickets.

Pro tip: We purchased our RER tickets to Paris, a Metro carnet (book of 10 tickets) and Museum Pass at the tourist office at Charles de Gaulle airport. It was helpful to have those items right away and be able to hit the ground running.

To read more about how to maximize your time in Paris, click here.

To learn about five teen-friendly restaurants in Paris – where you don’t have to dress up – click here.

The Best of Paris: 6 Sweet Treats That Are Worth the Walk

7 Surefire Tips To Maximize Your Time in Paris

I am a career educator, #autismmom and Color Street Independent Stylist. I help women refresh their style, their lives and themselves. Thanks for joining me here. Read More…