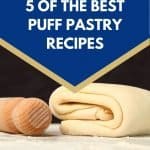 Do you need the best puff pastry recipe ideas?

Are you ready for some party food? Bonus if it’s easy AND impressive. When I was a kid, puff pastry meant party food. My mom would pull out her Better Homes and Gardens cookbooks (we owned the Joy of Cooking, but BH&G was more in sync with the contents of our suburban, midwestern grocery store, circa 1980), and get to work. Having both studied and taught French, she had traveled widely in France, and I think dishes with a little puff pastry were reminiscent for her.

My mom has always had a sweet tooth, so while you can easily make cheese straws, pigs in a blanket, or other savory treats she would always veer toward the desserts. Baked off and layered with strawberries and whipped cream. Or perhaps with some chocolate mousse. And there were frequently sweet breakfast pastries (admittedly many of them coming pre-assembled in the freezer section as more and more new products emerged.).

Fast forward to early 2021. Life exists on Zoom. So to travel without traveling (something I have been doing for years as an autism mom!), a friend from high school books us a class to learn how to make pastel de nata – live with Ines, a woman in her kitchen in Lisbon, Portugal. A true silver lining of the pandemic, these transportive experiences helped break up the monotony, and allowed you to learn recipes with your own oven and tools- meaning they are easier to recreate once the meeting has ended.

If you watch any of the competitive baking shows, like the quintessential The Great British Baking Show (The Great British Bake-Off in the UK, a name that has been disallowed in the US by the folks at Pillsbury), you may have seen the judges and contestants refer to “rough puff” versus “full puff” pastry.

Rough puff pastry typically involved grating cold butter into the dough to incorporate it, whereas full puff pastry involves layering the dough with a slab of butter, and then folding and rolling the dough in a process known as lamination. The process results in a flaky dough that bakes up into many layers.

Though I enjoy the show and watch it frequently, I admit to being a bit intimidated at the prospect of making puff pastry from scratch. I was more than content to stick with the box, like my mom always did.

Think Outside the Box

And then there was Ines. Ines did not really make it clear until we were well underway that what we were making was the formerly intimidating dough. We just jumped right in. And I encourage you to as well – having made this recipe several times now, I have seen that it is remarkably forgiving.

Butter oozing out in various odd spots? Just fold it over and pop the entire thing in the fridge. (Bonus tip: place your pastry mat or parchment paper on a rimless baking sheet to allow you to chill the entire batch easily)

Awkwardly shaped on that roll out? Just tuck in the edges, rotates it and roll it again.

And while her purpose (and mine) is to encourage you to make a delightful vessel for the eggy custard of pastel de nata, the dough can be used for any of these easy puff pastry applications.

Simply slice the chilled dough (after step 4) into long strips. Grate on some parmesan or other aged cheese and a sprinkle of salt and pepper. Twist each “straw” as you lay it on the baking sheet and bake for about 10 minutes at 425 degrees.

Cut the chilled dough (after step 4) into ~ 2 inch squares and tuck each into the cavity of a mini-muffin tin. Press in a few diced, sauteed pears and a pinch of gorgonzola or other blue cheese and bake for about 15 minutes at 425 degrees. (Also try: caramelized onions + goat cheese, or diced kalamata olives + feta).

Mini Pigs in a Blanket

Inspired by this recipe, take strips of puff pastry (after step 4) and wrap them around small hot dogs or sausages (try the mini-chicken apple sausages if you haven’t already!). Place the wrapped bundles on a baking sheet and brush with egg wash (egg beaten with a tablespoon of water) and sprinkle with sesame seeds, poppy seeds and/or everything bagel seasoning.

Festive in the fall (which is apple season in much of the US), just leave the eyes off the rest of the year and you’ll still have a tasty treat. Saute or roast peeled and diced apples with a bit of sugar and cinnamon (or pumpkin pie spice) and a pinch of salt. Then cut your puff pastry (after step 4 below) into rectangles and “fringe” the edges, as demonstrated here.

Spoon some filling down the middle of the rectangle and fold in the strips to make a mummy-looking pastry. Bake at 350 for 20 minutes and allow to cool. If baking in the fall, use a dot of honey or agave syrup to affix two candy eyeballs to each mummy. Dust with powdered sugar if desired.

If you have been following me for awhile, you may have noticed that part of my heart is in the Kona district, on the Big Island of Hawaii. Part of the reason I feel so at home there is that the Hawaiian islands are home to widespread cultural – and food – fusion. For someone who has always been “in between,” it has definitely become my home away from home. So as tasty as Ines’s recipe for pastel de nata was, I knew it would be a great opportunity for a little island-inspired fusion.

Portuguese influence can be found throughout modern Hawai’i food culture- including in malasadas (Portuguese style doughnuts), sweet breads, and, of course, in Portuguese sausage. But I have never encountered a pastel de nata in Hawai’i. The custard is made from egg yolks (the whites had historically been used to starch the collars of Portuguese priests), and it is easy to stir a bit of passionfruit puree in before pouring into the puff pastry crusts.

A few more notes on the puff pastry: 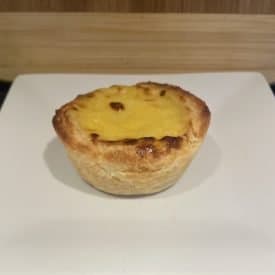 I have made this recipe in both muffin pans and pastel de nata tins. Because these are best enjoyed the day that they are baked, I prefer the flexibility of the individual pastel de nata tins as they fit more easily in my freezer and I can easily bake a few at a time for a delicious, homemade treat.
Keyword celebrations, sweet treats