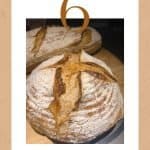 What are the Best Bread-Making Tools?

As an educator, I often have a summer project. This summer, it was homemade, sourdough bread. I learned a lot – particularly about the best bread making tools that make the process faster, easier and more enjoyable. As an #autismmom, I’ve spent a lot of time removing processed foods from our home, as well as many dairy-based items, especially for Mr. Diggy. This bread is a long, slow process, but in the end, there is only a small portion that is hands-on. It actually works well for our generally home-bound lifestyle.

Many others have written detailed posts about the making of Tartine’s Country Bread Recipe.  If you are looking for a tutorial, video or otherwise, this is not the place. I am a relative newbie to making this recipe (though I have had a decent amount of experience with other yeasted doughs over the year, like this great pizza dough).  What I’ve learned, however, that despite the bare bones of the ingredients – flour, water, and salt – the recipe is exponentially easier to execute with the use of a few key tools.

What I tried before:  Though I had been gifted one basket before I started, the recipe makes two loaves.  I used my one basket for one loaf, and a well-floured towel in a bowl for the other.  After the 3-4 hour resting time (or up to 12 hours in the refrigerator), the one in the basket came out.  The one in the bowl landed in the (searing hot) pan with the entire top “crust” still attached to the towel.

Why this is better:  The dough still needed a little nudge, but it came out with comparatively little effort.  I now have one round and one oblong basket, which leads me to the next two items.

What I tried before:  I have made other bread recipes in my Dutch oven and had difficulty “aiming” the dough into the hot, high-sided pot.  So I attempted to make my own combo cooker using my existing cast iron skillet as the base and the bottom of my Dutch oven as the top of the cooker.  Unfortunately, because the two were not a matched set, they didn’t seal well and thus the bread did not steam correctly.

Why this is better:  The combo cooker means you are aiming the dough into about 2 inches of searing hot metal, rather than 5 or 6 inches – a much-preferred experience.  And the lid seals snugly, allowing for the bread to steam in the initial baking.

What I tried before:  After failing with the homemade combo cooker, I cooked the second loaf in the Dutch oven, carefully flopping the dough into the higher-sided vessel.  By this time, the dough had rested beyond the ideal 3-4 hours, so it was a bit over-proofed. Yet I couldn’t fit two Dutch ovens into my wall oven at the same time.

Why this is better:  The oblong covered baker fits in the oven at the same time as the combo cooker, meaning the two loaves can be cooked simultaneously.  This means no over-proofing, and also means your total baking time is cut in half.

What I tried before:  I initially attempted to slit through the dough with my smallest – and I thought sharpest – kitchen knife.  That paring knife, however, was no match for the dough and barely make a mark. So I basically ended up stabbing the surface of the bread to make air holes (of course I only needed to slit one loaf, as the other one had plenty of, um, ventilation, due to the upper layer being affixed to the towel in the bowl).

Why this is better:  The lame made clean, easy slits that allowed for ventilation.  A small tool that makes a big difference.

What I tried before:  I have these Orka oven gloves, which work well for almost everything – and have a bonus of being both waterproof and washable.  But being mitts and not gloves, I lacked the dexterity to navigate the loaf into the pan cleanly. I could also (mildly) feel the heat of the cast iron through them after a few seconds.

Why this is better:  The articulated fingers on the oven gloves help a lot, as does the higher heat threshold.  Much easier manipulation of the super-hot pots.

The other must-have tool is a kitchen scale. You will get more accurate results and you should prevent yourself from ending up with an overly heavy, dense dough. (I actually didn’t even consider making this recipe without the scale, so I can’t tell you exactly what would happen without it!)

So this isn’t really a tool, per se, but it does make it SO much easier to transfer the bread from the basket to the searing hot pans. After the dough has rested in the baskets, remove the towel and place a sheet of parchment paper over what will be the bottom of each loaf. Using a pizza peel or cookie sheet, carefully flip the dough and the parchment paper over so the crust side is up, and gently remove the basket. Use the lame to vent the bread. Remove the cover from the combo cooker or covered baker and slide the entire piece of parchment paper AND dough into the cooking vessel and then place the lid on top.

Have you tried making Tartine’s country bread recipe? Do you agree that these are the best bread-making tools? Comment below with your results!

3 Reasons You Should Grill Your Pizza